In this VladTV clip, former NBA guard Craig Hodges, who won two NBA championships as a player with the Chicago Bulls and two championships as an assistant coach with the Los Angeles Lakers, wrapped up his interview with Vlad where he recounted landing a job as the shooting coach for the Lakers under head coach Phil Jackson.

3× NBA Three-Point Contest champion remembered his experience coaching Kobe Bryant and his reaction to the death of the NBA legend. Hodges said the loss of Kobe is a loss to humanity: 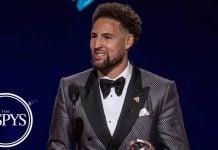