“Before I go to the U.S., I have a job to finish here in Israel,” Avdija wrote in an email. “As a competitor I am committed to my organization and teammates to help bring a championship to Tel Aviv. We were having such a great season, so winning the title, even with the delay and without live fans, will give me a sense that the hard work paid off.”

The 19-year-old was averaging 12.3 points, 5.9 rebounds and 2.4 assists in 27 minutes per game before the league suspended play in March.

The Israeli Winner League is one of only three leagues across Europe to resume after COVID-19 pandemic and the only one to play with all teams in regular league format.

They reportedly won’t use the “bubble” concept to isolate players.

Instead, teams will play home and away games without fans in arenas around Israel.

Players were instructed to self-quarantine at home other than for practice or games. 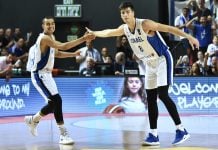 Deni Avdija: “I wish we come back with a medal”