Los Angeles Lakers center JaVale McGee used to be a regular on Shaqtin’ A Fool. In this interview recorded back in 2013 McGee who was then a member of the Denver Nuggets had a surprising response to the Inside the NBA on TNT crew.

Dennis Scott asked him what part of Shaqtin’ A Fool he likes to the most to which McGee responded by saying ‘I don’t watch Shaqtin’ A Coon.’

Here are some of he best appearance’s of McGee on Shaqtin’ A Fool: 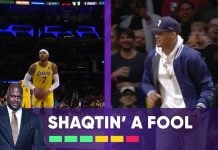 JaVale McGee on Chris Paul: “He’ll lead us to the Finals again”