Former Indiana Pacers legend, turned TNT analyst, Reggie Miller has praised the San Antonio Spurs’ scouting department for being one of the first NBA teams to regularly tap into the international market and succeed.

Miller admits that despite basketball being a global sport, the NBA is a little guilty of being more favourable to the American stars than looking overseas for basketball talent. He praised both Spurs head coach Gregg Popovich and his team of scouts that wonder all corners of the world in order to find the best players.

The ones picked, Miller highlights, have been quick learners of the San Antonio system.

“[Basketball] is a global game, and obviously the Spurs were one of the first franchises to tap into that and to have Aron Baynes, Patty Mills, obviously Manu Ginobili, Tony Parker and Boris Diaw, they recognise the talent that’s been overseas,” Miller explained to TalkBasket during a telephone conversation.

“Let’s give a lot of credit to the scouting department of the Spurs as well. It’s not easy. As I know, we like to fall in love with a lot of American players but to go global and find players elsewhere that could potentially fit your system, it’s one thing that Gregg Popovich and his scouting department have done. They have found guys that can play within their system, and that’s the biggest thing.

“The guys that I have mentioned are not the quickest, jump the highest or the most athletic but they play the Popovich way and the Spurs way and that is the most remarkable thing.”

Former New York Knicks and Milwaukee Bucks guard Greg Anthony, himself now an analyst with CBS Sports agreed and stated that the influence of Parker and Ginobili has helped San Antonio into an offensive powerhouse. But it stemmed from the arrival of forward Tim Duncan in 1997.

“Let’s remember that this goes back to the greatness of Gregg Popovich as well because his system evolved out of necessity,” Anthony said. “They warrant this type of team when Tim Duncan first got there. [The Spurs] were a defensive orientated team that didn’t score a lot. They didn’t have a lot of offensive weapons; they were a team that you could not score against.

“Once Tony Parker and Manu Ginobili developed into the great players that they are, that’s when that system started to evolve. And Popovich will be one of the first to tell you that it’s clearly influenced by international players no doubt about it, but I think that’s speaks to his greatness too. Very few coaches have the ability to adapt their style to their personnel.

“Look at Phil Jackson and what he did over his whole career. He coached it one way. Popovich, much like Pat Riley and what he did. They are two of the few coaches that coached to a system that catered to their personnel.”

While the NBA has continued to look overseas for potential basketball players, highlighted with scouts from the Memphis Grizzlies, Denver Nuggets and New Orleans Pelicans watching over the rising stars at the Nike International Junior Tournament last week at the Euroleague Final Four in Milan. The league’s knowledge of the European coaching department remains sketchy with veteran Maccabi Electra Tel Aviv coach David Blatt announcing that he would talk to NBA teams but admits that he wouldn’t be their first choice, despite continuous success both internationally and domestically over the years.

Both Miller and Anthony though admitted to not knowing too much if anything at all on Blatt though.

“I don’t know his resume,” Miller said. “But the way they are getting rid of these coaches left and right; more power for him. Come on down.”

Anthony added: I’m not that familiar with him, I don’t even know who he is but ultimately, the game of basketball is global. It’s the same all over.”

The NBA has barely looked into the coaching market overseas for potential playcallers but look to former NBA players who haven’t coached professionally at all as an answer.

Oklahoma City Thunder guard Derrick Fisher is one example as the veteran, who has not coached full-time is being considered by the Knicks.

Gregg Popovich talks on Spurs facing Steph Curry: “I thought we did well until he decided to do what he wanted to do” 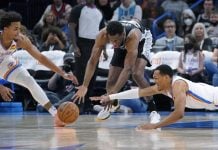 LeBron James on how he feels physically ahead of game vs....