Cleveland Cavaliers’ Larry Nance Jr. will go into the team’s practice facility when it opens on May 8 which is significant, as he has Crohn’s disease.

Crohn’s disease is generally treated with immunosuppressive medication that can make people more vulnerable to infections.

Nance however, has confidence in the drug Remicade that he takes to combat the disease, according to Marc Stein of The New York Times.

Nance was diagnosed with Crohn’s disease at age 16.

In 2017, Nance and a young Crohn’s patient named Noah Weber started Athletes vs. Crohn’s and Colitis, a foundation created to raise awareness for the disease.

Athletes vs. Crohn’s and Colitis hosts up to nine events per year, often at basketball arenas.

There is currently no cure for Crohn’s disease, as Nance knows he will have to deal with it for the rest of his life.

“The overarching goal would be a cure,” Nance has previously said. “That would be the dream come true. But for us, it’s more so about showing kids and showing people that even though you’re dealing with a chronic illness and even though you’re dealing with something that you’re going to have to monitor and manage for the rest of your life, it shouldn’t stop you from being and achieving anything that you want to.” 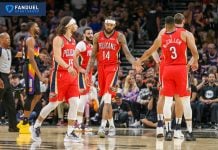