McCollum told Yahoo Sports’ Chris Haynes that he is mainly worried about the next steps that will come before possibly resuming the season.

“I am worried like the rest of the world, but I like that it is optional and I’m pleased with the caution, structure and measures the Blazers organization has put in place to ensure the safest environment possible for all parties involved,” McCollum said. “I get the measures [the league is] taking, but you have to think at some point when there are drastic measures that need to be taken, ‘Is it really worth it?’ It’s either safe or it’s not.”

McCollum continued, “And let’s just be honest, man, it’s not like it will be the first time players got gym access outside of the team’s facilities. Some people have been working out, if we’re being honest.”

Once practice facilities re-open, no more than four players can be there at once and there can’t be any practices or scrimmages.

On the “77 Minutes in Heaven podcast,” Mark Cuban recently echoed McCollum’s feelings and why the Dallas Mavericks won’t be opening their practice facility anytime soon.

“The problem, obviously, is that because we can’t test people, then we can’t assure anybody’s safety whether they’re basketball players or anybody else,” Cuban said. “Even though we can try to take all different kinds of precautions, it’s just not worth it.”

Teams currently have the final say on the issue. 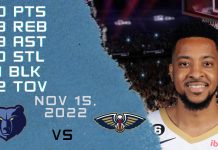 CJ McCollum on Western Conference: “I think it’s Golden State and the rest of us”

CJ McCollum: “I played with a guy who scored 50 more times than Allen Iverson”