Dwyane Wade’s son Zaire will not be teaming up with Bronny James (son of LeBron) next season. According to Sam Marsdale of 247Sports, the 18-year-old point guard left Sierra Canyon High School and joined Brewster Academy in Wolfesboro, New Hampshire.

The move was anticipated as D-Wade has publicly spoken about the lack of playing time his son gets in Sierra Canyon. Miami Heat legend was unhappy with the head coach Andre Chevalier and decided it was the best option for Zaire to move elsewhere. Things got worse as Wade tore a ligament in his right knee which ruled him out of action for a bigger part of the season.

Zaire himself understands it will take time for him to become an elite player and sees similarities with his father:

“Growing up he had three offers and I think Marquette was the best one,” Zaire Wade told 247Sports. “Me right now, I have a [a few] offers so there’s a lot of similarities that we’ve had growing up.

“He just tells me that all the five-stars and having a lot of offers, that doesn’t matter. There’s a lot of guys in the NBA who have had that same story. There’s not a lot of LeBron’s coming out of high school that are superstars right away. It takes time. It’s a marathon not a sprint.” 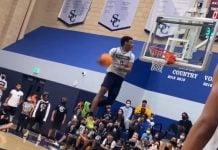 Bulls dominate the Lakers at Staples Center with three-point barrage

Frank Vogel reacts to Anthony Davis getting ejected vs. Bulls