The sportswear giant hasn’t officially announced the lineup but the likes of the Kyrie 6 and the Air Flight 89 have shown up in online imagery as part of the aforementioned and it is understood that the Adapt BB 2.0 is up next. As seen above, the $400 kicks bear a striking resemblance to the Nike KD 4 “Nerf,” a colorway considered to be one of the best to drop in the last decade.

The upcoming Adapt colorway has no affiliation with the toy company but it’s hard to rebuff the resemblance and theme.

There’s no concrete information going around as it pertains to a release date. The sneakers are expected to launch at some point this summer. 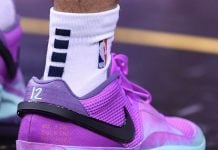 ICYMI: Kyrie Irving gets trolled with an NBA 2K shoes following break up with Nike