Los Angeles Lakers guard Kobe Bryant has said that he has been given permission to ‘ramp-up’ his exercises ahead of a return from an Achilles injury.

Despite his incredible work ethic though, he has also said that there is no definite return date.

“I just keep it all open right now,” Bryant told ESPNLA.com on Wednesday. “I don’t know why you guys are so hell-bent on timelines. It’s like the most ridiculous thing to me. It’s entertaining. When I’m ready, I’m ready.”

Bryant, notorious for shrugging off injuries in order to play is going by the book this time. It’s been six months since his Achilles tear and he has ruled himself out of the Lakers final five pre-season games before the opener against the Los Angeles Clippers on October 29.

The 35-year-old is continuously working on strengthening the calf muscle up by running on a specially altered gravity treadmill and getting himself into game shape, which Bryant says will take at least three weeks.

“I need to get my fat ass in shape,” Bryant said. “Six months of eating whatever the hell I wanted to eat and not running has caught up to me a little bit. So, I got to get in shape.”

He added: “I’ll be happy when I’m able to be out there on the floor and do what I do best,” Bryant said. “All this right now is just a process to try to get to that point.”

The five-time NBA champion has done some light jogging and set shooting on the court last week before heading to Germany for five days to undergo the platelet-rich plasma treatment known as Orthokine on his right knee. 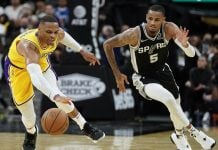 Russ gave a young fan his kicks after the win

Shannon Sharpe on Russell Westbrook vs. Spurs: “This is why you...