Minnesota Lynx claimed their second WNBA title in three seasons last night and they have ice-skating to thank for the latest championship.

They sweeped the Atlanta Dream 3-0 in the Finals to complete an unbeaten playoff run as the Lynx won the 2013 edition in the northern suburbs of Atlanta. Duluth’s Gwinnett Arena to be exact.

Atlanta’s record outside the Phillips Arena this season wasn’t all that good and when the Arena was booked already for an ice-skating event, they were forced to move to other venues. Lucky that there are gyms in abundance in Georgia, but Atlanta haven’t exactly been living in a dream world outside of their comfort zone.

To make matters worse, Minnesota had a winning record on the road and improved it to 14-6 with an 86-77 game three win to seal the WNBA crown. Atlanta dropped to 6-16 away from the Phillips Arena for the season.

The Dream, appearing in their third WNBA Finals were swept for the third time as their woeful record in women’s basketball’s biggest series continues.

The Lynx though celebrated, like they did in 2011. Protecting home court with two comfortable victories, 84-59 in game one and 88-63 in game two.

“That’s what a championship is supposed to be,” she said. “It’s supposed to be hard, and when it got hard, we came together and stuck with it and secured that victory. I’m just really proud.”

For Moore, a three-year professional in the WNBA, this win will be fondly remembered as she led nearby Collins Hill High School to the last of three straight national state titles before helping the Connecticut Huskies win two straight NCAA championships. She had strong support at the Gwinnett Arena due to her triumph at Collins Hill.

Success though has followed Moore, also an Olympic gold medal winner with the USA in London last year. Despite the accolades, she remains down to earth.

“I have so many people around me that I appreciate and who have helped me so much from middle school to high school,” Moore said. “I’m sure there’s some Connecticut faithfuls here, too, but when you think about all the things you want your team to be – we don’t just talk about it. We do it.”

Moore led all scorers in game three with 23 points. Rebekkah Brunson helped her out with a 15 point, 12 rebound double-double, a stat she assembled quietly.

“I’m sorry if we make it look easy, but it’s very hard to get back here,”  said Augustus.

“Look at what Washington did this year, what Chicago did this year. We’re just lucky to be in this position, and we’re willing to sacrifice some parts of their game to make this team better.”

Tiffany Hayes had 20 points for the Dream who are now getting used to unfortunate disappointment in the Finals. Worse still, in three Finals series, they’ve been swept in all of them.

In a positive light, the Atlanta franchise has come a long way since its 4-30 season when it all began for them in 2008. They’ve been post-season regulars from 2009-onwards and no doubt their day in the winning spotlight will come.

This year though was the year of the Lynx. 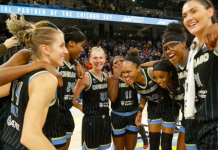 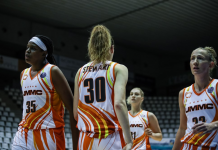