The time leading up to Detroit Pistons forward Christian Wood’s positive coronavirus test was reportedly seemingly like any other time.

“Me and Christian [Wood] actually went out to eat that night and he was fine, he was good,” McRae told NBC Sports Washington’s Chris Miller. “We had practice the next day, he was fine. Then before the [Sixers] game, he was like ‘Yo, I don’t really feel good, I might not play.'”

“We all gave him a hard time like, ‘Yo, we have Joel Embiid tonight and now you out sick? You don’t want to play,'” McRae continued.

Wood ended up playing and had a career night, scoring 32 points and grabbing 14 rebounds.

“After the game, we got on the bus to leave the arena but they then made us all get off the bus and told us ‘Rudy Gobert tested positive,'” McRae said. “So we came home, all got tested, and they told us we had to be quarantined for 14 days.”

Wood became the third player in the NBA to be diagnosed with the coronavirus on March 14.

McRae’s situation was a unique one, as he had just been claimed off waivers by the Pistons on March 4 and was staying in a hotel at the time when players were told to quarantine.

McRae recalls asking, ‘”Can I go home?’ I was in a hotel, it was nice but at the end of the day, it’s still four walls. I’m going to be here for 14 days? They ended up getting me an apartment. But for 14 days I wound up buying an Xbox. I don’t play [NBA] 2K but ended up playing 2k half of the time. It was tough. I played an 82 game season, the playoffs and the championship in three days.”

No basketball has McRae doing other uncharacteristic activities to stay in shape and stay entertained.

“I just bought a Peloton bike,” McRae said. “I’m not a fan of exercise bikes and treadmills because I always play, but now I find myself doing things I don’t normally do. I watch my highlights, I can tell you on some of my highlights what happens before it happens.” 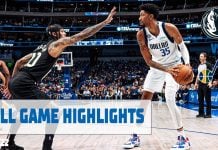 Could Christian Wood be the NBA’s best sixth man? 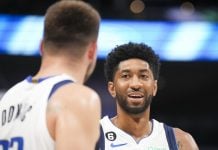 Luka Doncic not minding scoring milestone not achieved since Wilt Chamberlain in win vs Jazz; delivers praise on Christian Wood’s bounce back game Christian Wood no hard feelings about staying on Mavs sidelines in Suns’ late rally: ‘I’m just happy to be a part of this team’