NBA legend Isiah Thomas revealed what he told Derrick Rose before the latter signed with the Detroit Pistons last summer.

On the latest episode of Knuckleheads with Darius Miles and Quentin Richardson, Thomas revealed what he told Rose about the Pistons and the city of Detroit.

“Before he went to Detroit, I called him up and I said to him the same thing that Will Robinson said to me: ‘You ain’t ever gonna get loved more than when you’re in Detroit.’

Rose was the best player of the Pistons this season prior to the NBA suspension, averaging 18.1 points, 2.4 rebounds and 5.6 assists in 50 games. 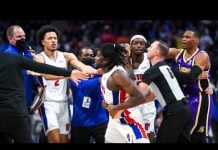