Walker compared Tatum to Bird and Pierce in terms of being the face of the franchise, adding that the versatile forward has undoubtedly arrived as the “next Celtic”.

Through 12 games on February, Tatum averaged 30.7 points on 49.3 percent shooting from the field and 48.1 percent from three. 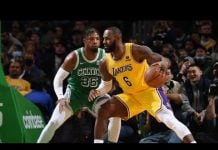