Dennis Smith Jr. is back in the Knicks rotation as Frank Ntilikina remains out with a groin injury. Last game Smith got a rare start and took advantage of the opportunity by stuffing the stat sheet. He had 15 points, seven steals, seven rebounds and five assists.

Elfrid Payton returned to the starting lineup tonight against the Charlotte Hornets after missing two games with ankle soreness, so Smith is coming off the bench with the Knicks’ second unit. He made his presence felt early when he split two Hornets defenders and got all the way to the basket for an emphatic dunk.

Smith can secure a spot in the team’s rotation if he plays well during Ntilikina’s absence and his athleticism can help him do just that.

Knicks’ Mason Plumlee is another name linked before the trade deadline 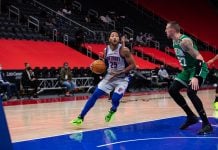