USA have announced their 12 players that will go to London for this month’s Olympic Games.

An experienced and versatile line-up will be looking to retain the gold medal they won in Beijing in 2008 and they will start as favourites.

USA players are currently training in Las Vegas for four days where they will begin their warm-ups against Dominican Republic on Thursday. Coach Mike Krzyzewski’s side then move to Washington DC, Manchester and Barcelona before their first Olympic game against France on July 29.

Rudy Gay, Eric Gordon and Anthony Davis were the final omissions from the team but have been told to keep working out and training in case of any last minute injuries.

“It was very difficult,” Krzyzewski admitted. “All the guys played so well. A lot of them built up equity, being a world champion in Istanbul. Eric Gordon and Rudy Gay were on our world championship team.

“Overall, I thought (USA Basketball Chairman) Jerry Colangelo and our staff took into account all our needs might in surrounding Carmelo Anthony, Lebron James, Kevin Durant, Kobe Bryant, those four in particular and how you make a team as a result of having those four as your center.”

The Duke playcaller added: “We’re definitely confident with the players we have chosen that can fill the need to defending the post, rebounding, and we can create match-up problems for other teams trying to compete with us.” 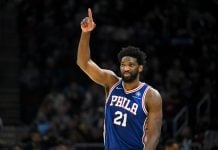