Boston Celtics’ Jayson Tatum bitterly responded to Domantas Sabonis from the Indiana Pacers participation in the NBA All-Star game. He singled out Sabonis’ only episode in All-Star game when he hit his only points from the freethrow line.

Tatum was the defending champion of the NBA All-Star Weekend Skills Challenge, but unexpectedly lost to Sabonis in the quarterfinals. From his tweet it looks like Tatum feels bitterness and frustration over losing to Sabonis, who finished after Bam Adebayo in the Skills Challenge. Celtics star mocked Sabonis involvement in the All-Star game.

Bro Sabonis’ HIGHLIGHTS is a fucking freethrow. Makes you really think if he belonged there

NBA players who got snubbed from the All-Star games retweeted this message, by implicitly expressing approval this post. 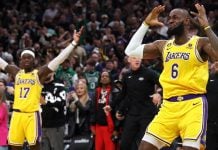