Turkey took one small step to Olympic qualification following a 65-49 victory over Japan in Ankara.

A strong first quarter from the hosts saw them to victory, as the Asian side were never really in the fight. Fenerbahce center Nevriye Yilmaz led Turkey with 16 points with team-mate Esmeral Tuncluer hitting 15 points on 75% shooting.

Japan, who now face an uphill battle to stay in Olympic contention were fronted by 17 points from Yuka Mamiya as only two player reached double-figure scoring numbers.

A bigger and more experienced Turkey side lead 16-8 after the first quarter as Japan struggled to keep up with a team that has already played once in this tournament.

It got worse for Japan, as they put more points on the board. But found the hosts scoring at will; Turkey led 36-23 at half-time.

Turkey were now in cruise control, sensing victory, they frequently subbed players in-and-out and despite a brave effort from the Japanese, they were still behind 52-39 heading to the fourth period. From there Turkey eased to victory. 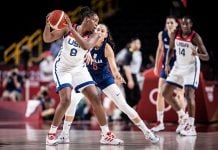