The FIBA World Ranking Women, presented by Nike, has been updated following the Tokyo 2020 Olympics as Gold Medal winners USA strengthened their grip on the top spot, with Spain leapfrogging Australia into second.

The USA – who also won the FIBA Women’s AmeriCup 2021 in June – defeated hosts Japan in the Olympic Final for their seventh straight finish atop the Summer Games podium.

Spain followed their seventh-place finish at the FIBA Women’s EuroBasket 2021 in June with a sixth-place at the Olympics to squeak into the No. 2 spot above Australia. After winning only one game in the Preliminary Round of the Olympics, the Opals made it to the Quarter-Finals but fell in a heavy loss to the USA and are now No. 3.

In addition to Australia, two other Asian sides played their way into the top 10, with China climbing two spots to No. 7 and Japan moving up two positions to No. 8.

Factoring into China’s rankings jump were their Group Phase victories over two teams that were higher in the rankings: Australia and Belgium. The fifth-place finish at the Olympics was the Chinese team’s best since the Beijing Games in 2008.

Likewise, Japan twice defeated higher-ranked France – by four points in the Group Phase and then by a 16-point margin in the Semi-Finals – before edging higher-ranked Belgium in the Quarter-Finals. While Japan (+60.6) earned more points than China (+35.1) in the latest world rankings, it was not enough to pass the Chinese team.

Serbia won the Women’s EuroBasket by defeating France in the Final with Sonja Vasic taking tournament MVP honors, yet lost to them when the teams met in the Bronze Medal Game at the Olympics. The Serbians are now No. 9 after China and Japan hopped over them following the run of strong overall performances from the two Asian teams.

After finishing 14 out of 16 teams at the Women’s EuroBasket and also failing to qualify for the Olympics, Turkey was the  biggest dropper near the top of the world ranking leaderboard. Previously No. 7, Turkey now resides at No. 10 on the rankings.

Puerto Rico, after reaching the Final of the Women’s AmeriCup and also playing at the Olympics, cracked the top 20. The Boricuas moved up six places to No. 17.

The Czech Republic have paid the price for not making it to the Tokyo Olympics or being able to use this summer’s Women’s EuroBasket as a springboard to next year’s FIBA Women’s Basketball World Cup 2022. The Czechs’ were particularly hit hard in the rankings by losing their Olympic participation points from London 2012 as they dropped from No. 16 to No. 22.

Another notable mover was Bosnia and Herzegovina as they rose seven places to No. 27 thanks to their thoroughly impressive fifth-place finish at the Women’s EuroBasket that booked their place in the qualifying tournament for the FIBA Women’s Basketball World Cup.

The ranking system is tabulated using an eight-year competition window including two Olympic cycles (2020 not taken into consideration due to the pandemic); national team results from the London 2012 Olympics have dropped out while the Rio 2016 Olympics’ results weightings went from .75 to .5. 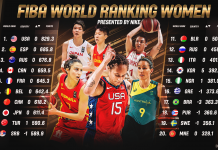