Lithuania coach Kestutis Kemzura has named a 23-man preliminary squad as his nation begins preparation for the upcoming Olympic Qualifying Tournament in Caracas.

The Baltic giants have an opportunity to qualify for the London Games due to them finishing fifth at last summer’s Eurobasket. They have been housed in Group B alongside hosts Venezuela and Nigeria.

During a press conference in Vilnius, Kemzura confirmed the list of players that he has selected, amongst them was Panathinaikos guard Sarunas Jasikevicius, but he is still not certain if he will accept the invitation.

“I wanted to let all these players know that they can be of use to the national team and they can end up being invited,” Kemzura said.

Another of the names included, but doubtful is Montepaschi Siena’s Ksistof Lavrinovic, who has admitted to having severe back pains and has said that he is not sure whether to travel to Caracas or London this summer. 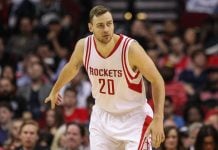