Krzyzewski, who coached Kobe Bryant on three different USA Teams, noted that Bryant was his leader in the three times he coached him.

Off the court, the head coach of Duke also shared how “amazing” Bryant was with his grandkids. 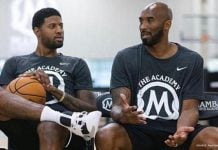