Charlotte Hornets’ Malik Monk has spoken to media during the team’s first practice session in Paris today ahead of the NBA Paris Game 2020, which will see the Hornets take on the Milwaukee Bucks at the AccorHotels Arena on January 24.

On his experience in Paris so far

Malik: “It’s great so far. We arrived last night – our hotel is really nice. Very traditional as well. I love the buildings and the history here. It’s my first time in Paris – I’ve just been to the Eiffel Tower and seeing that for the first time was amazing. I’m very happy to be here.”

On playing against the Milwaukee Bucks on Friday

Malik: “We’ve played them twice so far this season. We’ve got a pretty good chance if we come out and play hard but they’re a great team and they’re number one in the East at the moment so they’re always going to be difficult to play against. We can’t afford any mistakes against them but we just have to come out and play hard and we could have a good chance of winning.”

On how to stop Giannis Antetokounmpo

Malik: “Can’t stop him man – you can’t stop him. You’ve got to try and make him make tough shots but that’s easier said than done.”

On the Bucks’ strength and weaknesses

Malik: “They don’t really have any weaknesses to be honest because they have a lot of good players. They’ve got Brook Lopez who’s a seven foot shooter which spaces the floor, Eric Bledsoe is tough, George Hill coming off the bench. They’ve got a lot of vets that know how to play basketball and know how to pick mistakes apart. We’re a young team so we will make mistakes sometimes and they ill exploit that so we can’t make that many.”

On his passion for football

Malik: “I started watching soccer when I got to the NBA because of Nico [Nicolas Batum] so I’ve had to try and learn a little bit. I don’t have a favourite team but Cristiano Ronaldo is my favourite player. I also like Neymar as well.”

Who would you say is the Cristiano Ronaldo of the NBA and why?

On the game in Paris

Malik: “It’s a real game. This is fun obviously but we’re here for business at the end of the day. We’re here to win and hopefully we do that on Friday.”

On his season so far

Malik: “Kind of up and down. I’ve played well at some points and then bad at some parts as well. I think I’m getting better every day. One of my goals is to get more shots up and not necessarily do that extra pass sometimes.”

On playing in Europe in his career

Malik: “I would like to maybe when my NBA career comes to an end. They don’t care who the star is over here they just want to win games. There’s more defense and you can be in the lane. They also play harder too and it seems more competitive.”

On getting advice from Michael Jordan

Malik: “Whenever we lose he always drops us a text or something to say keep your head up and keep playing. He also gives us advice when we see him face to face he always tells us to keep working.” 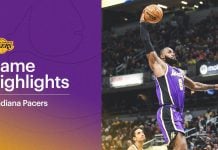 Lakers’ Russell Westbrook goes for impressive triple-double in loss to the...

Jamal Murray still ways away from season debut with the Nuggets