Anthony Davis scored 50 points (on 20/29 shooting), grabbed seven rebounds, handed out six assists, tallied four steals, and blocked a shot in the Los Angeles Lakers’ 142-125 victory over the Minnesota Timberwolves on Sunday night at Staples Center. The Lakers improved to 21-3, whereas the Timberwolves dropped to 10-12. After the win, LeBron James talked on Davis’ first 50-point game with the Lakers:

“He was efficient all night. Getting the ball exactly where he wanted it: midpost, low post, perimeter. He can do it all, so it’s our job to continue giving him the ball.

For me and AD, we just, it starts with us. If we’re on the same page it makes it a lot easier for the rest of the ballclub, and that’s both on and off the floor. So we’re just trying to lead by example, lead by command, lead by our voices, lead by our play and see where it takes us. It’s been pretty good for us so far.

I think the best thing about what happened today is he has the opportunity to just be great every night, no matter if he’s making shots or not. Just his presence alone and us as his teammates just continue to make him comfortable. He’s great. There’s nothing more you can say,” James said, per ESPN. 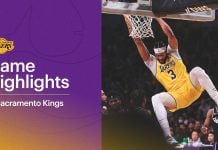