“Unfortunately, he was hurt. I have nothing bad to say about him. He worked hard for us, but just unfortunately didn’t have the health to make a difference for us,” Wizards coach Brooks said of Howard, who played in Washington last season, per News Advocate. 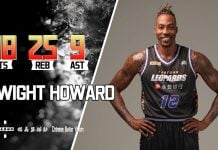