Aaron and Justin Holiday made history for the Indiana Pacers, as they became the first brothers to score 20 points each, while playing on the same team.

The Holiday brothers have been getting more playing time and have been relied upon more due to several injuries that the Pacers have suffered recently.

Aaron has gotten some major minutes lately without other point guards Malcolm Brogdon and T.J. McConnell, as he has played at least 30 minutes in three of the last four games.

His 24-point outing against the Brooklyn Nets was his first career 20-point game.

Justin has played at least 32 minutes in his last three games without players like Jeremy Lamb and Victor Oladipo, who could be nearing a return to the court.

His 20-point outing was the first of the season. 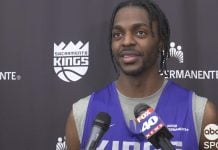