The NBA Draft has his own rules. One really important one is: Never be sure to be picked, even if you hold a promise by a team.

After a strong outing at the Adidas ABCD Camp and the Global Games in the US and a possible future in college hoops, the young Senegalese decided to play in Germany for second division-side TV Langen. Badiane, a rail-thin center with no virtual offensive game except dunkings still got drafted by the Rockets who brought in Pat Ewing to teach him the necessary skills. Signed to a long-term deal in Frankfurt with the Skyliners (Same team as Peter Fehse’s), he never produced big numbers and was not more than a role player in the “BBL”, Germany’s top flight. Later on, Malick tried to get into the NBA by joining the Rockets and the Grizzlies in the summer league and attending various mini-camps, but nothing materialized for him. Even a short and unsuccessful stint in the D-League would not help him securing a deal in the league. He now plays in the French second division “Pro B” for Boulazac and puts up finally double digits there.

The Dutch tower played for the second team of Barcelona in the amateur league “EBA” in Spain before getting picked up by the Raptors. In an interview with Hoopshype, he replied to the question what the Raptors saw in him: “I can’t say. I really can’t.” Sporadically used in the first team but was not able to secure a spot there in five years. Went over to the NBA every year to play in the summer league but could not vow anyone but landed a deal with Olimpija Ljubljana for three years. Had to leave Ljubljana in the first year (His contract was cancelled during the season. Averaged 4 points a game) and played in Cyprus, Ukraine just to finish his short-lived career in the lower Spanish ranks in 2010. Also known for being injury-prone which could have led to his retirement.

Came simply out of nowhere (SV Halle – Amateurs) and was tagged the next Nowitzki by greedy agents and was finally even picked up by Nowitzki’s personal coach Holger Geschwindner who tried to pattern his game after Dirk’s. Italian club-team Benetton Treviso quickly signed him before Fehse got drafted by Seattle and Wally Walker, who didn’t knew about his contract. The Italians parked him afterwards in Frankfurt where he played only sparingly with the Bundesliga-team and was used primarily in the second division (Eintracht Frankfurt) where team-mates called Peter often too soft for the game, as Fehse relied purely on his shot, standing on the three-point line or the elbow with his size. To his defense: Injuries always hampered his process and Fehse spent most of his career on the bench of Braunschweig in the first division “BBL”. He finally dropped to the Regionalliga to play with the BSW Sixers in 2010, which is the fourth division (semi-pro) in Germany.

Scouts told him to go back to school to work on his game after he declared surprisingly for the 2010 draft. But a recruiting scandal which involved him as well, forced him to leave UConn after a miserable first year and he landed in Turkey, where he was nowhere near ready to play professionally, although being already 24 years-old. His team lost six out of seven games with him in the second Turkish division and Majok first pro experience has been a short one. Back in Australia, where his journey initially started (He came to the country as a refugee from Sudan); he played off the bench for two teams in the pro league but without any significant impact. A last second addition to the Euro Camp, Majok did good there and had also after that a private work-out (Like this one here where he wears the white shirt: http://youtu.be/FEFpsKoYby0) with the Lakers and succeeded there, so they picked him up with the 58th pick

Played all of his life in the CBA, and even there, he was not able to score more than 12,5 ppg in his best season (2004) where he was also called up to play the All-Star Game. But back then, the level of play in the CBA was weaker compared to today, where former-NBA washouts dominate the league and Chinese players are rarely top-scoring. Nowadays, Yuyang registers merely 5 points a game. Being drafted a year after Yao Ming got drafted might be the reason, as the NBA focused at the time on China to develop another Yao which never happened (Mengke Bateer, Wang Zhi Zhi, Yi Jianlin and Sun Yue were rather disappointing players).

A year ago, Biyombo attended a few try-outs in Spain thanks to Jordanian national-team coach Mario Palma, who saw some potential in Bismack who competed with his team Yemeni team against Jordanian teams previously. He landed at Fuenlabarada and played in the third division for their farm-team before transferring to their ACB (First Division) team where he made strides and vowed NBA-personnel with his energetic style of play. Even though he ran into trouble with his team after departing for the Nike Hoop Summit without the approval of his coach, he became an instant hit on the web, as he dismantled the US selection in Portland and brought him a guaranteed contract today. A lot of people in the NBA are however questioning his age, as he plays, looks and talks like someone older than 19. Still, it didn’t hamper his career as he was picked up at seven and landed in Charlotte.

The Nigerian power forward got drafted directly out of Nigeria (Union Bank) after scouts noticed his strong performances in the dress of the junior-national team of Nigeria during the World Championships in 2005 (There is no other explanation for Cleveland’s choice). Extremely raw and with no professional experience and coaching at all, Ugboaja traveled across the globe to play in smaller markets like Cyprus, the D-League, Iran and Ukraine to polish his skills. A regular fixture in the national-team is probably the only international exposure he gets today, as he will never make it to the NBA. But it’s all good, as Ejike gets frequently his love in the east, and he finished the past season in Odessa on the black sea in the Ukraine.

When the Spurs drafted Karaulov, no one knew who he was. Guess this hasn’t changed up until today. The Uzbek played in the second division for the coldest city in the world, Jakutsk, prior to the draft. Khimky Moscow gave him a contract to develop his raw game, but failed to do so, resulting in various unsuccessful stints with teams in the first and second Russian division (Superleague A and B). Today, the 7-footer is still playing in the second division for Spartak Primorie Vladivostok next to the Pacific Ocean.

The majority of the NBA personnel probably heard this name the first time when he went to Dallas and then via trade to Minnesota in this year’s draft or maybe a day or two earlier when Jon Givony of Draft Express twittered his name. The top-scorer of the Qatari national-team had once a Congolese passport and is a countryman to Serge Ibaka (Oklahoma City). People on various international basketball boards previously discussed already Qatar’s national-team, in which allegedly only Africans and only one or two Qatari are playing, so Ngombo was known only to some die-hard experts and of course the big Pilipino-community across the globe due to the Philippines recently clashes in international competition with Qatar. But the wider audience knows him now due to the discrepancies regarding his age: http://www.asiabasketballupdate.com/1/post/2011/06/ tanguytarguy-ngombo-the-follow-up.html

Masai Ujiri, general manager of the Nuggets must have been utterly impressed with this kid at the Basketball without Borders Camp in Senegal last year, as he probably managed to get Maduabum a D-League contract in Bakersfield. Also, Ujiri’s connections to former Wyoming-standout Ugo Udezue, who is now a reputable agent (Hasheem Thabeet, Solomon Alabi and Ben Uzoh are his clients) are also a good vitamin for Chukwudiebere (Short: “Chu Chu”) to enter the draft and to get selected. The only downside for the 19 year-old Nigerian forward is that he averaged 0, 7 points per game and seven minutes per game through whopping three games in which he was used by the “Jam”. For the record: Three other Nigerian players of his club-team Dodan Warriors left in the same year for the United States. Seun Olarenwaju (Quality Education Academy, NC), Christopher Ewache (Our Savior New American HS, NJ) and Aruna Adetaranmi are all playing high school-ball, while Maduabum maybe should have went to college before taking his game to the NBA. But by picking him up, the Lakers/Nuggets created the most unknown player of the whole last decade in the NBA Draft, who may never set foot on a NBA-floor in the future. 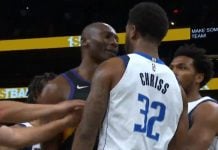 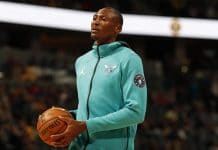 LeBron James will be eligible to sign extension with Lakers on...