Last season didn’t go down as a success for AEK Athens. The 2018 Basketball Champions League and Greek Cup winners could not defend either of their two trophies, even though they found consolation in lifting the Intercontinental Cup in Brazil.

Howard Sant-Roos, one of the Greeks’ main pieces, had a decent season, averaging 6.8 points, 4.2 rebounds and 2.8 assists in BCL action. However, in the crucial second-leg game vs Brose Baskets at OAKA, even the experienced Cuban national could not privide the necessary fire power on offence, shooting 0/6 from the field, while his defensive skills did not prevent a fatal Tyrese Rice floater that sealed the outcome and the qualification to the Final Four for the Germans. In the Greek League, Sant-Roos had the chance to give AEK Athens the pass to the finals for the first time in 14 years, but it was Promitheas Patras who stopped the “Queen’s” guard-forward and went on to become the finalist.

Nevertheless, Sant-Roos has always been a versatile player and a very useful tool in the hands of any coach, from David Blatt to Luca Banchi and now Ilias Papatheodorou. In this interview with TalkBasket.net, the 28-year-old refers to the renewal of his contract with AEK despite the Euroleague sirens that echo in his head, his defensive-minded playing style and what lies beneath it, as well as the elements that will determine his team’s season.

Q: Howard, you signed with AEK for two more years. How did you make the decision? Was it an easy one for you?

A: It was pretty easy because I wanted to stay. It had a lot to do with the new coach, the fans and the experience that we had last season. So, I decided to stay for two more years.

Q: I remember you saying in the 2018 AEK Athens Media Day that you’d like to play in the Euroleague. Does this extension of your contract mean that you’ve given up on the idea?

A: Not at all. I’m still 28 and anything can happen. I’m not giving up on Euroleague at all. I know that AEK is playing in the BCL, but for me it’s mostly about how you feel, about how comfortable I feel in the club and in the city. I know it’s kind of crazy me saying that I still want to play in the Euroleague when AEK is playing in the Champions League and has no intention at all to go to the Euroleague. That has nothing to do with me giving up on the Euroleague because anything can happen and any decision can be made, halfway through the season, next season or in two years from now. We never know.

Q: What’s the goal of AEK this season? Is it to redeem yourselves for what happened last year?

A: We definitely want to do better than last year, for sure. I know that AEK fans -and we also- were disappointed. We came up short because of one shot, one possession. We kind of left a “message” last season that we could have made it. I believe in AEK and that we can correct the mistakes we made and cross out what happened. I don’t feel that we lacked certain things, it was just those situations that can change a game in a quarter of a second. We had everything we needed, but either you win or you lose. AEK was the loser last year, but I don’t feel we were missing something.

Q: You won the Greek League’s Best Defender trophy. What does it mean to you?

A: Of course I’m proud of it. It means a lot because it pretty much shows the type of player I am and that I have worked hard for it.

Q: Tyrese Rice said that you were one of the best defenders he had to go up against. How hard do you expect your next encounter to be, now that he’s playing for Panathinaikos OPAP?

A: It’s never easy when we’re talking about very talented players. Much respect to him for saying those words because he’s very talented, as he also showed last season in the Champions League. Just as other players practice and believe in their offence, I do the same with my defence and I will keep doing it.

Q: Which are the ingredients of a good defensive player?

A: I think it’s the will to say: “OK, I’m going to stop this guy”. I don’t feel that you’ve got to be really talented in order to become a good defender, but you have to be willing to stop anyone that’s in front of you. Of course, you have to be athletic, follow coach rules and be at the right place in the right moment.

A: I’m definitely seeing some more spead. We have a lot of one-on-one players like Langford and Ray and we will be counting on that. Teams win games and we want to build chemistry.

A: Wherever they need me. You know me, I’m going to be pretty much everywhere: 1,2,3. I have played at all those positions throughout my career and it feels the same. You just have to keep the spacing and all the stuff that we already know about. Of course, the point-guard brings the ball, but everybody else is helping him on the court. We got Kendrick Ray and Nikos Gikas as point-guards, so I will be moving between “2” and “3”.

Q: Which element will determine AEK’s success or failure this year?

A: Team effort, team defence and the chemistry that we’re trying to build. 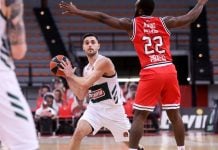 Panathinaikos gets past Olympiacos to take the Greek derby

Players side with Thomas Heurtel in his conflict with FC Barcelona