If you were able to check out the latest in U.S. college basketball, you may come across the name Blake Griffin. The power forward who really powers his way to the basket is probably a future NBA-star in the making. Thanks to ESPN America (NASN), I’m able to watch a lot of college basket ball games and with all the live and re-live games you are getting a good overview what’s going on the NCAA and who’s hot and who not. Although games of Oklahoma are rare on ESPN, the news on Blake is plenty. Just take a look on one of his recent highlight dunks:
{youtube}IuyOcVeAuuI{/youtube}
Griffin, who hails from Oklahoma City and therefore stayed in the state of Oklahoma to team up with his older brother Taylor (Is currently averaging 8, 9 points and 5, 7 rebounds per game in his senior-year), is in the race for Player of the Year honors and is ranked as the Number 1 Pick by Draft Express, NBA Draft.net and ESPN in the upcoming NBA Draft 2009.

His progresses in all major categories of the game are evident: Averaged 14,7 points per game and 9,1 rebounds per game as a freshman and is now up to sensational 22,1 PPG and 13,8 RPG while averaging 63,2 % Field-Goal Percentage ( 56,8 % FG in 2007-2008). His only weaknesses seems to be free-throw shooting (58, 4 %) and he turns the ball over quite often (3, 2 Turnovers per Game) but as a the go-to-guy, he does get the ball a lot and is getting double-teamed on most of the plays. Only a few players with his height (2,08m / ‘6-10’) are as mobile as Griffin (Great body control) and can put the ball on the floor to drive down the lane. Relies sometimes too much on his athletism, especially on defense, but with his tremendous upside, he might even excel one day in this part of the game.

Griffin has been compared to “Carlos Boozer with more hops” (ESPN) and “Antonio McDyess” (Draft Express) but he reminds me athletically on a taller LeBron James, especially with his bulky frame.

“Have you guys ever seen the movie, ‘The Terminator?’ That’s what that kid is like,” Knight (Son of legendary coach Bobby Knight) said. “That kid has no facial expressions. He just plays and it’s like every kid out there on him is like Sarah Connor, and he’s just going to take his time and kill him.

The Sooners went through a rebuilding season in 2006-2007 (16-15) under new coach Jeff Capel, who is no other than this guy right here:
{youtube}o92H4xXzDOY{/youtube}
In 2007-2008, Oklahoma carried a record of 23-12 to make the NCAA field only to leave the tournament in the second round (Lost to Louisville). In 2008-2009 the team lost only one game so far (24-1) and is currently 10-0 in Big 12-play. With a young coach (Capel is only 33 years-old) and even a younger star (19 years-old) in the making, the only conclusion for me is a run for the national title as the Sooners are being currently ranked second in most polls, just behind the Huskies from Connecticut. Only time will tell if Oklahoma can handle all the hype around their best player and if Griffin can steadily produce such great numbers like the 42 points and 23 rebounds against Texas Tech, but I’m confident to see the Sooners reaching the Final Four this year, Griffin is too much to handle for most teams around.

I’m out with another highlight dunk, this time with both of the Griffin brothers.
{youtube}6pZxRclvvJQ{/youtube} 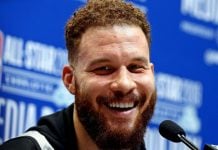