USA saw off the challenge of a well drilled Brazil side, winning 70-68 in one of the games of the tournament in Istanbul.

Kevin Durant, who led scorers with 27 points, was aware of the threat that Brazil faced.

“Brazil is a well coached team, who have a lot of good players.” Durant said after the game.

Barbosa drew Brazil to within two points with 20 seconds remaining – Huertas was fouled, with 3.5 seconds left. He missed the first, purposely missed the second, Barbosa grabbed the loose ball, and missed his contested lay-up to give USA the win.

In probably the most enjoyable first ten minutes, Brazil had the upper hand on the Americans, with breathtaking fast-break basketball, getting out to an early 10-6 lead off a Wellington Dos Santos triple.

As you would expect, the NBA-filled American roster hit back with their own style of fast-break basketball, culminating in Kevin Durant levelling the game up at 13 with a three of his own.

A high-tempo, free-scoring first quarter, ended with Brazil leading, 28-22 – and the packed crowd at the Abdi Ipecki, breathless.

Despite this, Durant thought the energy was lacking.

“In the first half, I thought we didn’t bring any energy into the game. But, overall, it was a great game.” Durant stated.

For the crowd though, the fun didn’t stop, as Guileherme Giovannoni got he second quarter underway, with a lay-up – followed by a Durant bucket, plus the foul.

Durant was proving to be the Americans only source of scoring – as he racked up 19 points in the first two quarters. Brazil up 46-43 at the half.

The U.S took the lead mid-way through a slower-paced third quarter, as a Durant triple and a trademark floater from Rose gave the States a 52-50 lead.

The score stayed that way for two minutes – the first real spell of cold-turkey from both sides.

Brazil though relied too much on their three-pointers – and the Americans punished them, at will. Durant with back-to-back buckets giving USA a 61-55 lead with a minute to go – Brazil came back though. Barbosa narrowing the gap – and the two sides went into the final stanza with USA up, 61-59.

The fourth quarter began with the crowd firmly on Brazil’s side. When a U.S.A chant was started, it was met with resounding boos. The States though, got the upper-hand, early on. Derrick Rose converting, to make it 66-62 in his side’s favour.

Buckets were traded – loud cheers for the Brazilians, boos for the Americans. Billups hitting a pair of free-throws to give America a 70-66 advantage. The final two minutes brought everyone to their feet.

“In the second half, points came easy (both teams).” Coach K added.

“Both teams played with great heart – and I think it showed the character of each team, and to me when a team shows its character, in a bad way or a good way, and I thought both teams showed it in a good way.”

John Hobbs for TalkBasket.net – in Istanbul.

Discuss the 2010 World Championship in our forums! 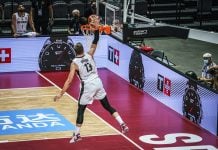