Team USA head coach Gregg Popovich stated that the loss to Australia in Melbourne (94-98) can be a wake-up call for his squad.

Here is what the legendary coach said after the first defeat of the Americans since 2006:

“It’s really a testament to how long they stuck together to get this accomplished tonight. So, I’m going to give them credit at both ends of the court. They executed really well and they came up with the victory.

The Aussies gave us a great lesson as far as where we have to be and how we have to play in this kind of competition. So we’ll get used to that and hopefully learn.

It’s not just the fourth quarter; we didn’t play well for the entire game. We made some poor decision. Some of this was expected; we are a new group; we are still learning the system.

The loss means that we need to play better. It’s a measure of who you are. Nobody wins forever. This is a group of guys that’s worked very hard, like I said, to get to know each other and get to know a system.

And whatever comes, we can handle. Our job is to try to get better every day. We learned some things tonight. We’re actually a better team now than at the start of the game because of the knowledge from the game, so now we move on.” 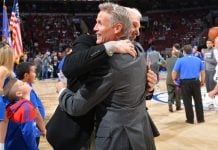