2019 NBA champion Jordan Loyd has officially signed with Valencia, as the Spanish club announced on Monday (05/08).

Loyd has agreed to an one-year deal with the Spaniards and will remain with the club until the end of the 2019/20 season.

The 26-year-old guard spent the previous season with the Toronto Raptors, averaging 2.6 points in 12 games. 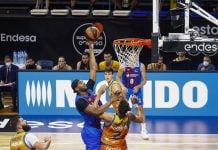 Jordan Loyd turns down an offer from Maccabi Tel-Aviv, per report