AX Armani Exchange Olimpia Milan will pair a former EuroLeague MVP with an Alexander Gomelskiy EuroLeague Coach of the Year this season after signing Sergio Rodriguez to a three-year contract, the club announced Tuesday.

The 2013-14 EuroLeague MVP will be the coach on the floor for four-time champion Ettore Messina, who won the Gomelskiy Trophy twice.

In his two seasons with CSKA, Rodriguez also helped the team win a pair of VTB United League titles and reach the 2018 Final Four.

Rodriguez started his career with Spanish side Estudiantes and also played for Portland, Sacramento and New York in the NBA before joining Real Madrid before the start of the 2010-11 season.

In his six seasons with Real, Rodriguez led his team to Final Four appearances in 2011, 2013, 2014 and 2015, three consecutive championship game appearances and the 2015 crown – the club’s first EuroLeague triumph in 20 years.

He also helped Madrid win three Spanish League titles and four Spanish Copas del Rey as well as the Intercontinental Cup in 2015. In 234 EuroLeague career games with Estudiantes, Madrid and CSKA, Rodriguez has accumulated 2,426 points and 1,093 assists. He ranks fifth in competition history in assists and fourth all-time in assists per 40 minutes (8.60).

Rodriguez has also been very successful with the Spanish national team, which he helped to respective gold medals at the 2006 FIBA World Cup and EuroBasket 2015. He also won two Olympic medals – silver in 2012 and bronze in 2016 – as well as getting the silver at EuroBasket 2007 and bronze at EuroBasket 2013.

Armani Milano without Sergio Rodriguez, Gigi Datome ahead of EuroLeague round 17 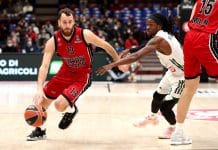