Mike James will be looking for another team to continue his career after his contract with Olimpia Milano was terminated.

According to the official announcement by the club, both parties reached an agreement regarding contract termination conditions. 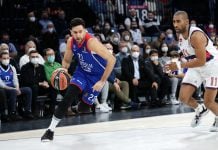