According to Shams Charania of The Athletic, free agent Ben McLemore has agreed to a partially guaranteed two-year deal with the Houston Rockets.

McLemore, who was the 7th overall pick in the 2013 draft, played in only 19 games with the Sacramento Kings last season before being waived.

He was also a participant in the 2014 NBA Slam Dunk Contest, where he lost to John Wall.

The partially guaranteed contract means he will have to earn his way onto the Rockets’ final roster through training camp. 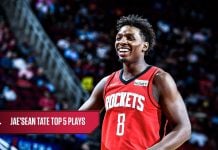