Omri Casspi, the first Israeli player to ever play in the NBA has had a successful NBA career thus far, so much so that the 22-year old has had a mural painted in his honour in Sacramento.

However, the 206cm forward’s mural has recently been defaced with swastikas, not once, but twice.

Visit Interbasket to read all about the double racist attack against Casspi in Sacramento.

Omri Casspi will reportedly continue for another season with Maccabi Tel... 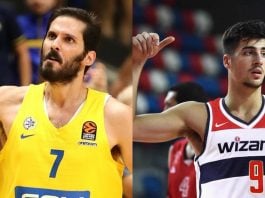 Omri Casspi: Deni Avdija has to learn how to handle fatigue

Milwaukee Bucks boycott Game 5 of their series with Orlando Magic...

LeBron James says he wants betterment for all, no matter color...