The second game of the EuroCup quarter-finals saw Valencia qualify to the semi-finals for a record eighth time, while the other three series will be decided in Game 3 on Wednesday (13/03).

Despite losing by six at halftime (39-33), Valencia turned things around to earn a double-digit lead (50-64) and never look back. The Spaniards crushed their opponents (56-71) and will play in the semi-finals.

Mike Tobey led the winners with 18 points, as Fernando San Emeterio added 11. On the other hand, Martynas Echodas had 11 points for the losing squad.

Dmitry Kulagin led the way for the winners, with 26 points, whereas Errick McCollum was the only player that scored in double figures for the losing squad (11).

The Spaniards were in front from the opening tip and never looked back, as the series will return to France for a must-win game.

Theo Maledon was the best player of the losing squad, with 16 points and five assists, as AJ Slaughter added 14 points and Miro Bilan 12.

ALBA Berlin was unstoppable and decimated Unicaja Malaga on the road (81-101) to bring the home-court advantage back to Germany.

Five players scored in double figures for the winners, as Rokas Giedraitis had a game-high 23 points. 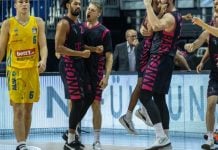