Canada officially qualified to the 2019 World Cup, following their triumph over Brazil in Sao Paulo (67-94).

Marquinhos Sousa (17 points) and Vítor Benite (16 points) were the best players for the losing squad.

The visitors dominated their opponents in the second and the third quarter and outscored the hosts 32-58 to take a double-digit (34-45, 52-76) and cruise to an easy victory.

Canada (8-2) will make its seventh appearance in the World Cup since 1954, whereas Brazil (7-3) will have to wait and see the other results. They will also play against the Virgin Islands and the Dominican Republic in February.

🎥 @CanBball 🇨🇦 and @basquetebrasil 🇧🇷 faced off in Group F's last day of action in the #FIBAWC Americas Qualifiers! #ThisIsMyHouse 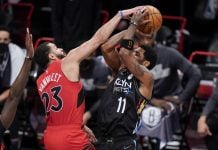 Toronto Raptors make franchise record with 12 wins in a row