Monaco guard D.J. Cooper revealed that he is temporarily leaving basketball, due to family reasons.

Cooper, who will terminate his contract with the French club, released the following statement via Monaco’s official website: “I decided to take a step back from basketball and put an end to my contract with the Roca Team for family reasons. In the current state, my mind and concentration are not basketball and I don’t want to be a cause of disruption for the team.

This team that I love, this team that represents the extraordinary Principality of Monaco, that brought me a unique life experience. This team represents a professional organisation led by committed, passionate and vigorous people. I wish my teammates and coaches the maximum success. This group of people has a great character strengthened by a common goal.” 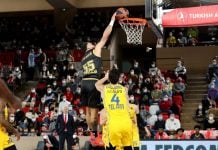