Of course he didn't say it exactly like this. Nando De Colo was asked by tubasket.com about the final shot he made against Greece in the last Eurobasket which led to France facing Spain in the quarterfinals.


"If I knew we were going to face Spain, I would prefer to have missed that shot" De Colo said.

Of course at the moment there was still one game to be played in the group so nothing was decided. As De Colo said even if he had missed the shot, France may still have had to face Spain. In any case he stated that there is no remorse as he acted upon his coach's decision. The French guard also confided that during halftime, team France had agreed that it would be better to lose the game against Greece.

You can catch the whole video in english here . 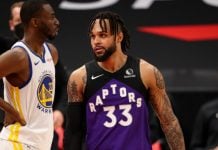