Chicago Bulls’ Nikola Mirotic has accepted team-mate Bobby Portis’ apology for a bust up in training back in mid-October.

The incident left the former Spanish international hospitalised and he has only just returned to action.

Mirotic addressed the Chicago media regarding the incident, especially as a picture from the Chicago Tribune surfaced of the two exchanging pleasantries.

A picture that tells a thousand words (Via @chris_sweda) pic.twitter.com/xutSND0wBf

“I will not comment on anything in the past. I’m here just to support them (the team),” Mirotic said to the Chicago Sun Times. “If I’m here it means my team needs me.”

Mirotic also said he accepts Portis’ apology. When asked if Portis knew that, Mirotic said: “I guess he will know now.” 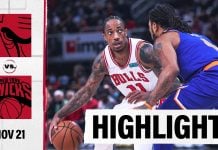