Regal FC Barcelona have announced the renewal of Roger Grimau for the 2010/11 season.

The team’s captain earned himself a new contract after an excellent season with the Blaugrana. Barcelona had the option on the player’s contract for another season and used it, something the player thanked the club for doing.

Grimau’s future was one of the few unresolved issues of Barcelona regarding next season and has now been closed. The player himself stated that he hoped and was sure that the club would eventually keep him, despite the one-month long negotiations between the two sides.

Both the player himself and the club’s General Manager Joan Creus were delighted at the news that Barcelona will be the city to host Euroleague 2011 Final Four. 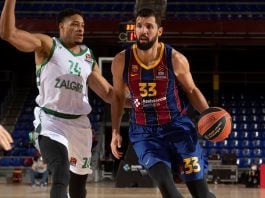 Pau Gasol on Barcelona rumors: “I’m not ready to get back...