While head coach Lazare Adingono remains in charge of the team, a number of new faces are set – if available – to make their international debut with the Cameroonians.

Among the newcomers, Joel Embiid and Pascal Siakam – a pair currently making waves in the NBA – headline the provisional list.

They will be joined by Los Angeles Clippers forward Luc Mbah a Moute, who might play his last FIBA AfroBasket.

According to the FECABASKET, the provisional list gives them a chance of choosing players for the qualifiers and for the Final Round in August (19-30) in Brazzaville, Republic of Congo.

Following last month’s FIBA Africa Zone 4, six national teams have been drawn into two groups of three teams each and will play a tournament over two legs.

The Qualifiers will be played in a round-robin format with each team taking on its two opponents. The top team of each group will qualify for this summer’s FIBA AfroBasket.

Group E will be played in Yaounde in March. 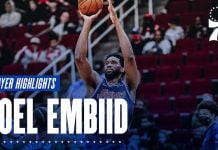 Joel Embiid: “To be able to win every single night, I’ve got to show up”

Kevin Durant with no hard feelings after jawing exchange with Joel Embiid: ‘We just respect each other’