Over a week has passed since Pablo Prigioni’s surprise decision to retire, a month into his EuroLeague return with Baskonia. The Argentine though has no regrets on the timing, saying that was the right decision.

In a professional career spanning twenty years, the 39-year-old captured three Spanish King’s Cups, four SuperCups and an ACB championship with Baskonia but there was one title that eluded Prigioni: the EuroLeague trophy.

“Yes, it is something that I would have loved to achieve, but it is also true that I give a lot of credit to those Final Four appearances, because most of times, we made it with less budget than other big teams,” Prigioni said.

“It was already a success to make it to the Final Four. Of course, once you make it, you want to win, and we were always missing something to get it. Still, I give those Final Four appearances plenty of credit because it was really tough to get there.

“While some teams with big budgets improved their teams every year, bringing in top-level players, at the same time Baskonia lost some of our best players, every year. It was difficult to replace them but despite losing important players, we made it back to the Final Four and played four consecutive ones.”

Prigioni moved to the NBA in the summer of 2012 after thirteen years in Spain and despite finding his way to the New York Knicks’ starting line-up en route to playing for the Houston Rockets and Los Angeles Clippers in a three-year career, Stateside, the Argentina international never saw it as home.

The EuroLeague though made Prigioni the player that he was, saying that there was nothing envious about playing in the NBA.

“I always said over the last few years, while I was in the NBA, that playing the EuroLeague had nothing to envy in comparison to playing in the NBA because of its competition level and the excitement it brings. I don’t know how to express it because the Spanish League is also really strong, it has always been, but the EuroLeague was the biggest step to take in Europe.”

And Prigioni’s decision to leave the NBA for Baskonia was the perfect final chapter for him. But upon arrival, he knew that his season-long deal was not going to last its duration.

“A number of things marked the way I needed to take, which was taking a step aside. I never felt that way in my career and that made me think that if I felt that way, there had to be a reason why. It was time to stop.” 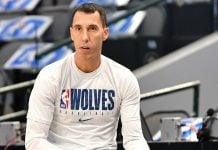