Playing at over 11,000 feet on top of a glacier is something that doesn’t happen very often, but San Antonio Spurs guard Tony Parker can tick that off his bucketlist (if he even had that on there).

The French international partnered with Swiss watchmaker Tissot to host the game at that staggering elevation and the views are absolutely breathtaking: 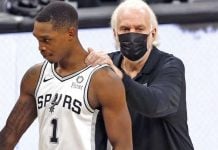