Game three of the second round and the lights inside the Stade Pierre Mouroy go bright red, and Poland walk down the ramp and onto the floor to a rousing reception of 21,302 fans.

Instead of those fans rocking the red of Poland, they were wearing the blue of the tournament’s host nation. Hardly a Polish flag in sight.

France’s clash with Turkey followed Poland’s meeting with Spain but it was evident whom the pro-French crowd were rooting for.

With every possession, forced turnover, foul drawn and score, the fans were boisterously cheering for the Poles and merifcially booing the Spanish.

“It gave us confidence and it really pushed us tonight, and I was disappointed that we didn’t give them a win.”

Indeed though, it is common knowledge that the rivalry between France and Spain, especially over the last four years is fierce. The two competed in the 2011 Eurobasket final and in the 2013 semi-final with Spain winning the former, France the latter.

The two rivals met again in a bad-tempered quarter-final encounter at the London Olympics in 2012 that was marred by a violent swing by France’s Nicholas Batum on Juan Carlos Navarro with 23 seconds of the game remaining and Spain up six points.

But after witnessing their rivals get the better of them in the last two big tournaments, the French got their redemption in Ljubljana, Slovenia by outlasting Spain in overtime of their Eurobasket 2013, semi-final, eventually going on to win the tournament.

And if that wasn’t enough, France went that little bit further by crashing Spain’s home World Cup last summer in Madrid, eliminating the hosts in the last eight and going on to win the bronze medal, something that wasn’t in the script at all.

“It was a surprise, I followed the World Cup and when I read the final score of Spain and France, I had to have a second look,“ Damian Kulig, who led Poland with 10 points in the loss said.

So it was up to Poland to give one of the tournament favourites a competitive game – and they had no reason to fear Spain – they had the same 3-2 group stage record going in, and pushed the hosts France to the limit in Montpellier.

And indeed Poland kept the French fans entertained throughout, with beautiful ball movement, good execution and taking advantage of the occasional Spanish error and turning it into easy scores. Victor Claver fumbled a straightforward pass that instead landed into the grateful claws of Mateusz Ponitka and he slammed it home, giving Poland a 31-30 lead with 4:24 of the second quarter remaining.

But despite growing in confidence and enjoying a chunk of the lead in the third quarter, Poland were pegged back to 55-55 going into the final quarter.

That’s when Spain turned the tables.

“It was a close game, but we were prepared for that, so we didn’t panic,” Spain coach Sergio Scariolo said. “We were in control and the good thing is we know our situation. We know our strengths and our weaknesses so we know that we can go in and blow the opponent out in one, two or three quarters like when we didn’t had a full roster.”

And blow the opponent out, Spain did.

They came alive in the final period. Back-to-back three-pointers from the evergreen Pau Gasol gave the Spanish a 77-59 lead with just under three minutes to play and any hope of a Poland fight back was gone.

But also for Spain, they managed to silence the French faithful that were warming up their vocal chords for the next game.

Spain, to the dismay of the faithful French following, marches on. But for the fans, it wasn’t all bad … they saw their heroes dismantle Turkey to advance to the quarter-finals. 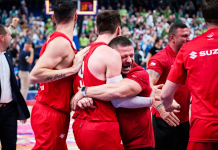 Polish dreams as they prepare for EuroBasket semi-final