Australia beat New Zealand 71-59 in the first game of the 2015 FIBA Oceania championship series in Melbourne on Saturday.

The game itself certainly lived up to all the hype, especially with the traditional New Zealand haka ritual being taken to a new level of intensity with Australia’s players basing themselves mere centimetres from the dance.

And when the action got going, the 16,000-strong pro-Boomers crowd were treated to a strong Australian second quarter as Andrew Bogut highlighted his international comeback after three years away with a slam off the feed from Cleveland Cavaliers’ Matthew Dellavedova.

Trailing 34-26 at the half, the Tall Blacks needed to find an antidote to the Australian dominance and in the shape of Corey Webster, they found it as he brought the game close on a number of occasions until San Antonio Spurs’ Patty Mills guided the Boomers to the finish line for now.

Mills and David Andersen both led the Boomers with 17 points. Webster led all for New Zealand with 22.

“I thought we did a good job of just maintaining our intensity, our commitment to the work that’s required at the defensive end and that’s going to give us a chance to be successful in this series,” Boomers coach Andrej Lemanis said.

“We only gave up six offensive rebounds, which is a key when you are competing against a team like that which just smashes the offensive glass.”

Australia now head to Wellington for game two on Tuesday with a 12-point lead. The prize for the winner is a spot at the 2016 Rio Olympics. 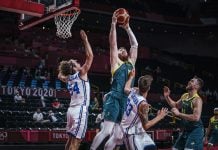