Nikola Milutinov will resume his career in Greece, joining Olympiacos for two years with the option of a third.

The 20-year-old talent from Serbia made his professional debut for Hemofarm in 2011, but next year he moved to Partizan Belgrade. After two seasons where his playtime had decreased, he seized the opportunity and last year he had a solid season with the Serbian side, managing to draw much attention.

In the 28 games he averaged 9.8 points and 7.6 rebounds, even achieving a double-double against Levski Sofia with 21 points and 10 rebounds.

The 2.13m. center decided to try his luck in the NBA, and he succeeded to become the 26th overall pick from the San Antonio Spurs.

It was a hot summer for him since several European teams had their eyes on him but Olympiacos was his final decision.

“Olympiacos BC agreed terms with the basketball player Nikola Milutinov for the next three years”, is the official announcement of the team. 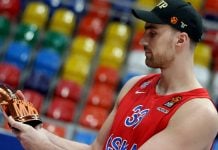