After the game, the 22-year-old small forward received praise from head coach Mike Brown who also revealed a hilarious conversation he had with the player.

“I ain’t gonna lie Keegan surprised me tonight. He surprised me in a couple of areas,” Brown said after the game. “Him driving to the rim and getting his stuff blocked a lot. For him to decide to drive to the rim and show that he’s strong enough, he’s long enough, he’s athletic enough and he’s had enough of me calling him out and go dunk the ball.

“He had a couple of moves that I’m very impressed with. I can’t wait to go back and watch him on tape because I love, absolutely love his aggressiveness. He was fantastic.

“Not only was he fantastic scoring and shooting the ball 10/12, 5/7 … 11 rebounds. Two games in a row he’s got a double-double. He is more than capable. I’m glad that he’s starting to show a little bit of what he can do. It was a fun performance tonight to watch from Keegan Murray.

“I love his confidence too. I slapped him after the game like five or six times and I said ‘Dude you’re sh*t Keegan Murray.’ You know what he said? He’s smiling and he says ‘I got little wiggle.’ Keep doing the wiggle, whatever wiggle is, keep doing it ’cause it was fun. Great game Keegan Murray.”

This season Murray is averaging 12.1 points and 4.2 rebounds in 29 minutes per game. 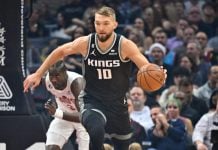 Keegan Murray on Domantas Sabonis: “He can be in the MVP conversation” Mike Brown on All-Star voting: “Them fans don’t know what they’re talking about”