The 33-year-old small forward was in Paris for a regular season game between the Bulls and Pistons and was asked about the possibility of playing in Paris Olympics next year.

The Bulls star has not closed the door for the national team yet. DeRozan said that “it’ll be tough to say no” if he is called up, per Tim Reynolds. DeMar DeRozan: “Nights like this, we gotta turn into a consistent thing, no matter who we’re playing against” 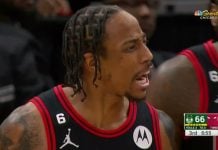 DeMar DeRozan on getting elbowed by Grayson Allen: “It’s his track record”