Recently John Wall opened up about his time in Houston. Among the things he said was how the Rockets were losing on purpose.

Wall recalled a 20-game losing streak that his former team went through during his first year with the Rockets. According to the team’s head coach Stephen Silas, it was a difficult situation for both the player and the team.

“What John Wall went through here and the situation (he was in) was unprecedented,” Silas said, per Kelly Iko. “There was no easy way for it to go down. We tried to make it as good as possible for him as an organization…There’s frustration and I get it.” 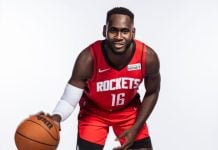