“Well first, Drew is one of the best players to ever play college basketball. We recruited him. Love his family. Love him. Not an individual that can stop him. I thought Flo [Thamba] and Josh [Ojianwuna] did a great job, but really, you focus through team defense. Drew did a great job involving his other teammates. So his numbers might not have been there, but he did a good job involving them. I thought the rest of the guys on the court really had great Timme awareness and tried to make everything tough for him.” 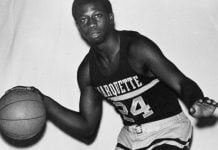 Shaka Smart on Marquette’s blowout win over #6 Baylor: “If we were going to make it George Thompson night, we couldn’t lose”

Scott Drew says Baylor winning national title is huge for the state of Texas, first since 1966

Steven Gray puts his scoring shades on display in Greece